7:40 am flight to Houston. Exit row seat, yay. Didn't have enough time to prepare so no movie to watch. Listening to Gameface. Good.
Above the clouds where it is sunny. Won't get to Mexico D.F. until after 8. Hoping for good BBQ in Houston.
Now Band of Horses. Infinite Arms. Now Kevn Kinney and the Golden Palominos. A Good Country Mile.
From Houston I will contact Oscar and tell him yes, thanks, I'll take the V-Strom for two days. The only thing that may hold me up is the fact that I need to configure a VPN and zone based firewall at the office tomorrow. Never done a zone based firewall on a Cisco router before, so let's hope I get it going tomorrow. I guess I could ride Saturday and then Sunday morning and still have a good chunk of Sunday to work if I need to.
For those who are worried about me riding in Mexico solo, I've decided to take the route with the most little towns and paved roads. I won't get stuck out in the wilderness with a broken bike or leg. No Internet on this plane so this will get posted from planet Houston. 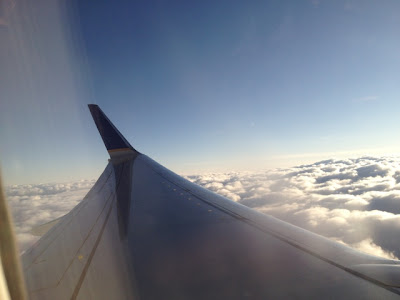