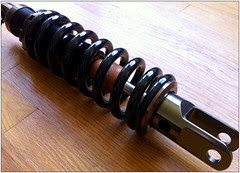 The Progressive Suspension 465 rear shock for the KLR showed up. The stock shock has been in need of some attention for at least a year now. It is like Tigger's tail, far too bouncy. No pre-load and no rebound dampening. Hopefully I'll get the new beast in this weekend. I've got new wheel bearings and a doohickey for it too. One thing at a time though.

Posted by Swamp Monster at 4:47 PM