I can't hear you! 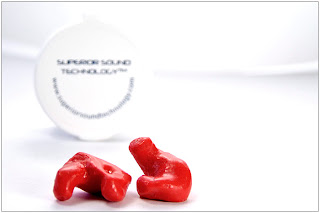 I was at a trade show in southern California earlier this week. Nope, not moto-related, but for work. I did see a vendor there that I had seen at a previous show. A vendor that was pushing a product I had wanted to try.
I went for it.
The sound of trade show booths being dismantled faded as I sat in the chair. The subtle popping started as the silicone started to cure. I was on my way to custom earplugs. Yes!
The silicone is offered in several colors. I had originally opted for black, but Michael mentioned that when, (not if) I drop one on the tarmac, black is hard to find. I opted for red, an easy to spot color on pavement and in the dirt.
Yes, they look a bit strange, but feel so much better than the expanding foamies that I have been using. They are supposed to block the wind noise (and loud noises, --have you heard the sounds my muffler makes?) but still allow a conversation and the sounds from intercom systems to make it through.
Comfortable, yes. The fit is amazing. They don't pop out, and don't press into the sides of the ear canal at all. They look weird, but feel great.
Functional, they block the sounds of a trade show take down. I'll let you know how they work while on the bike as soon as I ride! (Give me a break, it is supposed to snow tomorrow!)
I also had molds made for in-ear custom molded audio monitors. (That's fancy talk for custom MP3 earbuds that block outside noise.) I'll be ordering a set of those for the long days on the August 2011 Seattle to Deadhorse and back trip.
Thanks to Michael at Superior Sound Technology ( http://www.superiorsoundtechnology.com) for staying a bit late at the convention to squirt silicone in my ears.
If you're in the southern California area and need earplugs that fit look him up.
Posted by Swamp Monster at 6:37 PM