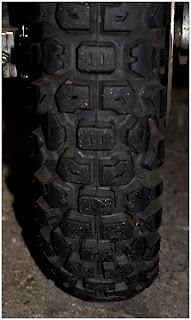 The 2010 TDC TT Tour was cut just a hair short by my old tires. We had to head back from Potholes WA via I-90 instead of Canyon Road. My bike felt like the tire pressure was low, but when checked it they were a-ok.

We stopped in Cle Elum WA and found the ONLY bike shop open on Sundays.
Big thanks to Motor Toys in Cle Elum for the new rear tire.
(http://motortoysofcleelum.com)
With choices limited I decided to go for the Shinko 244 5.10-17.
30 minutes and it was mounted and I was ready to go.
The weather put the tire to the test right away. Cle Elum to Issaquah the rain fell so hard there were grey moments where you couldn't even see the taillights in front of you. Wilder's jacket pockets filled with water. After drilling a hole in his phone a week later water still poured out. Jesse's pants leaked. He got a little "wet in the pants".
I stayed dry, and the tire stuck to the road like it was a new, dry, hot Arizona highway.
The weather has been less than dry lately. This tire has been sticking to the tarmac like stink on poo.
Motor Toys of Cle Elum, and the Shinko 244 saved the 2010 TDC TT Tour for me.
New tires *before* the Washington Backcountry Discovery Route, and the TDC 2011 Top of the World Tour next year.
Posted by Swamp Monster at 11:11 PM